A few months ago I talked about using Open Source software in your small business. If I remember correctly I mentioned the fact that we use a decent amount of open source technology in our company. This week I decided as a proof of concept I would only use Ubuntu( one of the most popular Linux distributions), for everything except billing because Quickbooks is a Windows only application and while there is an open source alternative moving the entire database to it doesn’t make sense for only about a months use.

Let’s start with the basics. Like all Linux distributions Ubuntu is very customizable, for my taste I used an a package called Macbuntu 10.10 available for free on Source Forge 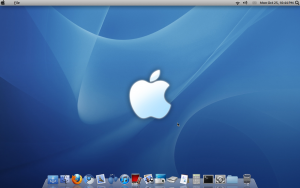 It has all the usual windows applications and plug-ins like Flash, Java, and applications like Chrome and Firefox. The reason I can get away with using this Open Source Operating System is because even if there is no native Linux version of your favorite application chances are there is an Open Source alternative that either comes pre-installed or easily installable.

For an application like Photoshop, there is a Linux version that Adobe makes available if you would like to purchase a copy however if you would prefer to save yourself or your company there is a perfectly capable application called GIMP. As you can see it has a familiar look and most if not all the features, of its more popular cousin.

In fact there is an alternative for just about every application in the Adobe Creative Sweet including InDesign, and Premiere

The biggest criticism that Linux and its cousins usually get is that it is heavily command line driven, and while this is true for the most advanced features this not the case as of late, and especially in this version of Ubuntu. This istyplically the case when trying to install a third party application, however Canonical has created a software store similar to the App Store on IOS but mostly free( I haven’t seen a paid app yet!) like the Android Market Place with one click installation.

What about the everyday software like email? Well you have your choice of Thunderbird which is a simple download and install and the built in client called Evolution. Evolutions is closer to Outlook thank Thunderbird with things like built in calendars and the like. However the biggest benefit to using Linux is the fact that when combined with cloud based software it becomes possible to work with ease since there is no software to install in most cases and occasionally a light weight client.

In closing the final benefit of using a solution like this, Linux is free! Meaning that we community supported Distributions like this you never have a pay a licensing fee like you do on Windows and it runs on modest hardware meaning you can spend as little as $250 per computer, sans monitor of course, compared to the average of about $400+ when the price of a Windows license is included, and that is not counting the license for the other apps like Office.

Something that I did not mention is the fact the Linux is very secure, most viruses and other security issues will not affect Linux since it is completely different than Windows, however there is a built in firewall and a virus scanner is available for download. More on these topics in an upcoming article.

Keep in mind we are not discouraging the use of Windows, far from it, it is still what we use on a daily basis but for a small business trying to expand or a new startup with little capital for technology investments Linux is a very appealing choice.